A Walk on the Wild Side

We played around a blowhole and explored a few of the bigger caves
The labyrinth of caves at Yesnaby were unfortunately inaccessible due to the swell.

However we said "hello" to a group of climbers there.

No doubt enticed on by the thought of the now traditional BBQ at Bilia Croo, everyone was willing to commit to the next unforgiving section.

A few puffins were sighted in the water, one flying right over my bow.

The huge narrow stack at Black Craig was as impressive as ever.
Bilia Croo was very much welcome when we landed there.

While we pondered how much energy was being created by the Oyster wave generator,

Coming out of Bilia Croo, the sea provided a bit of surf to crash through.
Our original plan was to finish at Warbeth where a car had been left, but it emerged that Jackie needed to join the dots between Warbeth and Stromness to complete his circumnavigation of mainland Orkney.
Skaill to Stromness, it now became.

Two of the group then so enjoyed rockhopping that they failed to see one breaker coming in that left them both out of their boats in knee high water!

Although against the neap tide, the final leg was calm and unchallenging finishing up taking a short cut under the pier.


All back in Stromness for 7.30pm.
While cars and kayaks were being reunited, the non-drivers managed a quick pint (on tick it seems) in Stromness!
Posted by Peter at 22:00 No comments:

On Saturday 9 May, Peter , Angus, DaveM, Antje and Romain set off from Craigiefield. We crossed the String with tail end of east going tide and an 18mph tail wind to pass just south of Heliar Holm. We continued towards the south coast stopping for a break just short of Ness of Howe. 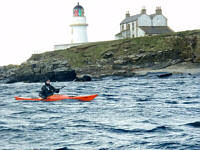 Once round the south east corner, we encountered a pleasant but big slow tidal swell which took us past north up to Linton Bay.
Here we stopped for a long late lunch (waiting for the tide to slow before the Ness of Ork) and chat with Kenny Meason. The sun only stopped shining when Romain took his cag off! We continued on in now very pleasant calm conditions to pass a colony of seals before rounding the Ness of Ork. 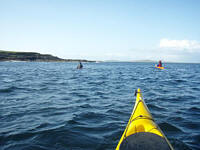 Once west of Ness of Ork we encountered some short wind generated chop which was hard work for a short while. However a short break improved body and weather and we had a pleasant paddle for last 2 miles into Lochend where we camped for the night. The sun continued to shine even while we pitched tents.

Catering was thanks to Angus Romain and Antje!

There were a few wet squalls throught the night. Contrary to the forecast, the wind did not settle completely: there was still a significant nor'westerly. We dithered and set off later than planned. We made slow progress to Galt Ness due to the headwind, arriving at gone 9:30. There appeared to be some flatter water close to the point and Angus and Peter dipped their noses into this. only to be quickly swept into a very jumbly tidal stream. Deciding to back off and go back, Peter and Angus collided, resulting in Peter ending up in water a few yards from the shore. It took a short while to establish a tow to take Peter out of the rough stuff, by which time he had been swept north a considerable way. Angus's valiant attempts to tow back to slacker water in the lee of the Galt made no headway against a strong tidal stream. Even after Peter transferred himself to the back of Dave Malcolm's boat, no headway could be made made. After about 10 minutes non-productive towing, Angus rightly put out a Mayday call on the VHF.

The Mayday call was received not only by the coastguard but also by several nearby vessels. After a short time, Dave Gentle and crew arrived in a small fishing boat - "Fair Fortune" - pulling Peter out of the water 13 minutes after Mayday call. A hot cup of coffee was very welcome. A second fishing boat - "Millennium" - arrived about a minute later to take Peter's kayak on board. A rescue RIB which had also been launched from the North Isles ferry "Earl Sigurd" followed shortly. The RIB escorted Dave and Angus in their kayaks back to the shore where Antje and Romain had sensibly taken refuge. Not long after, the Kirkwall lifeboat arrived and took Peter and kayak on board. The lifeboat crew kindly offered to take all paddlers and kayaks back to Kirkwall which we gratefully accepted. 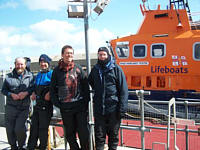 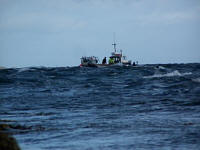 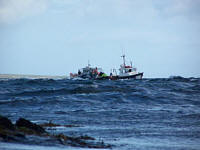 Many thanks to "Fair Fortune", Shetland Coastguard, "Millenium", "Earl Sigurd" and the Kirkwall Lifeboat "Margaret Foster".

Correct use of VHF can be lifesaving!
As stated in our original plan , we should not have tackled the Galt after 9am when tidal flow was into 3rd hour (approaching its maximum spring rate)
Without a second experienced paddler, the group was in difficulties following Peter's capsize
A second available towline could have made a big difference (one was around Peter's waist)
Flares should have been more accessible (they were under hatch in capsized kayak)
Further rescue practice for all in rougher but safe water would be worthwhile
eg Scapa with onshore wind
Posted by Peter at 08:44 1 comment:

On hearing that the Ark Royal was coming to Scapa Flow, an idea sprang to Johnny's mind. Yes, it was January ... but it could be quite fun to visit her - we might even get invited on board for a pink gin in the wardroom! The idea was mooted on the OSKA forum and before long, 3 folk of a similar mind "volunteered", all who could skive off work on Tuesday 27 January 2009. The initial weather forecasts were not great, but the morning of the 27th dawned with sun and a mild South Westerly that was due to die away as the day progressed.
Guided by Orkney Harbours information, Johnny, Peter Dave and Jackie met at Houton at just after 9am but actually launched from Swanbister. We were later told that the Ark Royal had been asked to "move on". We headed straight for the Ark Royal which was now anchored NE of Flotta. We made good time, despite a detour to avoid the path of the "Samco America". Cheery waves from the crew initially welcomed us as we approached from the starboard. However, as we rounded the bow almost within touching distance, we were politely informed by a lady officer (with gun) that a respectful distance of 500m should be maintained around the "warship". We deferentially backed a little further away but still managed a few good photos between us.

Quite a few other boats had come to visit, both officially and otherwise. In addition, there were several small boats decorated with a White Ensign circulating around the Ark Royal. We chose not to argue with these guys either! We reckoned that were nearly 20 boats visible on the Flow
After having outstayed our welcome, we decided to visit the "Samco America" which had now dropped anchor, a couple of miles away. The crew of the tanker seemed somewhat less interested in our presence (although it has to be said that to the best of our knowledge they were unarmed). It still looked a very unequal contest between Jackie and the bow of the tanker 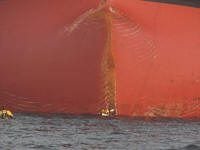 The F in Fog

Thursday 5 June
The exercise had been cancelled by the lifeboat crew: Jeck was devastated!). It was, however, a beautiful calm and sunny day so we agreed to meet up, as planned, immediately after work. At this point someone suggested that, as we were no longer constrained by the lifeboat exercise and it was such a lovely evening, we could perhaps do something a little bit more ...
9 kayaks launched from Mill Sands across several miles of seaweed (or so it seemed at the time) at just before 6pm. Johnny was resplendent in his brand new skyblue and white Eddyline kayak. The water was lovely and we made across for Mull Head hitting the shoreline again close to Halley. The journey was idyllic and we were in no hurry. We explored the north coastline of Deerness in detail, popping in and out of every geo and cave. 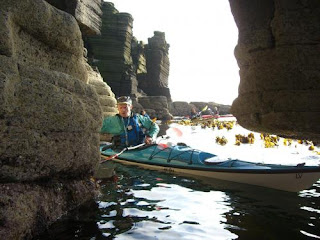 Then, just before getting to Mull Head - the haar came in, came in good and proper, a real pea souper.
2 of us were separated from the rest of the group at this point but soon gained a fix on a well kent pair of vocal cords! The group now reunited, we realised that we were getting hungry (yes, we had come out before tea intending a short paddle). Emergency chocolate rations then came in handy before setting a course back. The sun filtering through the sea mist made some interesting visual effects. 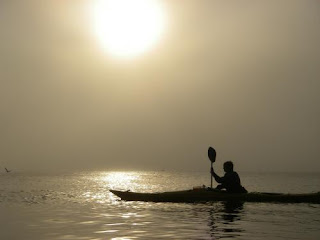 We had got a deck compass (but no map). Our estimated bearing of due West would not have been far off the mark. However, we were understandably unkeen to to let the shoreline get out of sight. After exchanging greetings with a Dutch yacht, and land ahead we decided that Mill Sands was to the port side. We eventually heard the sound of cars on the main road and realised we had strayed south and were by the old Toab school at the Bay of Suckquoy. We were a little off track. We turned around closely following the coastline back to Mill Sands getting back at after 10pm.
The detour had cost us an extra 4 miles. The one silver lining was that the tide was now right in and there was no portage at the end of the day. Home for tea. Johnny and Peter agreed on a plan to tell their respective wives that it was all the other's fault, a plan doomed to failure.
Posted by Peter at 08:28 No comments:

Tuesday 29 April 2008
Tuesday arrived bright and clear after the heavy rain on the Monday. That evening, 8 kayaks headed out from Inganess to the Head of Holland.
After a straightforward pleasant paddle out, we rounded the Head where we were surprised to find a young lamb and ewe at the foot of the sandstone cliffs. Sadly the ewe was dead -probably having fallen from the cliff. The orphaned lamb was left on the rocks at the bottom of the cliff without any apparent way to get back up again. We considered the situation - without help the lamb was unlikely to survive. So Johnny Johnston went ashore to retrieve the lamb which was then placed in the back of Matt Orchard's kayak. Matt then paddled a few hundred yards further round to a point where both he and the lamb could get back up to the fields above.

Mission accomplished, we took a brief look in to the Bay of Meil before returning to Inganess with the setting sun - a pleasant and hopefully worthwhile evening. Interesting question was whether lamb was born before or after the fall.